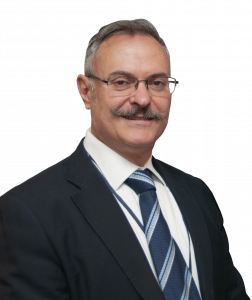 Born in 1960, chemist. His further education included management and business administration, European law and regulations. Officer in the Italian Corps of Engineers. After being visiting researcher in Germany and France, he started in 1987 as a researcher at the Italian industrial research centre for the development of new materials (CSM).
His career within the European Commission started managing European Coal and Steel Community (ECSC) steel research. Between 1995 and 1999 he managed the ECSC-Steel research and technological development programme. In 1999 he became the assistant to the director of “Industrial Technologies”. Amongst others, he prepared for the provisions to bring to its end the ECSC Treaty and to launch the new research fund for coal and steel (Treaty of Nice, Protocol VII). Meanwhile, since 1999 he promoted initiatives in nanotechnology. He has been Head of the newly-created Unit “Nano- and Converging Sciences and Technologies”; he initiated and chaired the European Commission’s inter-service group “Nanosciences and Nanotechnologies”. Between 2008 and 2013, he has been Head of the Unit “Materials” launching (amongst others) international initiatives on critical raw materials. Between 2014 and Sept. 2016 he has been Head of the Unit “Strategy” in the Directorate “Climate Action and Resource Efficiency” in the Directorate-general for Research and Innovation, where he managed Unit “Horizon Strategic Planning and Programming (Co-creation & Co-design)”, dealing -amongst others – with Horizon 2020 and the proposed Horizon Europe. He has also been acting Head of the Unit “Missions and Partnerships”. He was Director (acting) of Directorate A “Policy and Programming Centre” preparing the first Strategic Plan for the implementation of Horizon Europe. Now he is Head of the Unit RTD.03 Chief Scientific Advisors, Scientific Advice Mechanism, European Group on Ethics in Science and New Technologies.
To mention: many policy documents (Commission Communications etc.); successful activity in international cooperation. Moreover: 4 patents, more than 50 articles, 4 standards, 12 books as editor and 2 as co-author, 2 newsletters, 3 webpages, and 5 movies on science and research.
Lecturer in “Management of Enterprises in the European Union” at the University of Bergamo, faculty of economics. He has been advisor to HRH Prince Philippe of Belgium, now King of the Belgians, and member of the Scientific Council of the Italian National Council of Research (CNR). He is treasurer of the association of the reserve officers of the Italian Armed Forces (UNUCI) in Belgium and member of the Belgian military circle Prince Albert.